Public forum for those seeking support for their experience in the LDS Church.
Post Reply
6 posts • Page 1 of 1

Three summers ago, I saw the Tower up close and personal. I had seen it when I was an infant but who recalls those things. To make our trip more "real" we stayed in an apartment in Paris. No hotels and English speaking for us. We visited as many sites as we could. Notre Dame Cathedral, The Arc de Triomphe, Versailles in all it's glory, the famous Paris Opera House, and the Louvre. Okay so we didn't tour the Louvre, I was too hung up on the outside gardens. We took the train to Normandy and cried our eyes out as we walked the beaches and towns involved in D-Day. It is still overwhelming to me.

We hit the Eiffel Tower somewhere mid-way. It did nothing for me. We took the obligatory picture, us kissing, it up behind us, walked underneath, shrugged and walked away. The Tower, that is now synonymous with love -Paris and such was kind of a fluke thing. It was built in 1887 - 1889 as the entrance to the World's Fair. Even before it was built it was scheduled to be dismantled by 1909. Paris is filled with remarkable art, architecture, sculpture, bridges, churches. This thing is a metal object. However, visitors to the World's Fair fell in love with it. It became iconic because of people. Everyone wanted their picture with it, wanted to climb the stairs and see the view. France couldn't tear it down. Now it's a souvenir, a postage stamp, a symbol of Amore (love). For me, I could take it or leave it.

In the LDS world (and yes in life, too), big unsuspecting towers become the masthead of the ship of Zion. For most of us here the towers are problematic. We'd be fine if they never existed, we can't figure out how they became so important, we even know which monument we would rather have as the mascot of our society instead of the tower. Question is would I throw out all of Paris because of a large metal structure that means nothing to me? No. The world and people need Paris. We need the art, the architecture, the vision. So I always flash quickly past the kissing photo, then move slowly onto the golden Opera House, the passionate Notre Dame buttresses, the Versailles gardens, and the Arc de Triomphe.

Others can keep their Eiffel Tower if they want, I just know that Mr. Eiffel had planned to take it down. 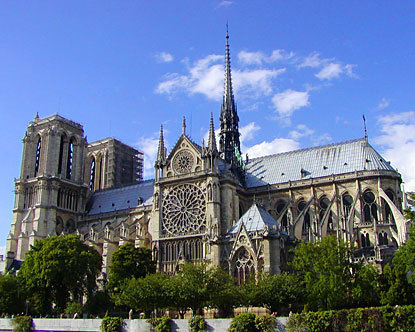 good analogy- resonates within my reasoning as well. thanks!
Top

Thank you!
I see through my glass, darkly - as I play my saxophone in harmony with the other instruments in God's orchestra. (h/t Elder Joseph Wirthlin)

Nice analogy mom, now there's a few leaning tower of pisas that could be toppled...