Not really, Enoch. I have written about this question to varying degrees on my personal blog, but I haven't tried to create a synthesized statement of any kind regarding how I view the idea of a savior.

Perhaps the closest I've come is something like my talk from last Sunday, which I posted here. It doesn't address the idea blatantly, but it kind of hints at the idea that "savior" and "redeemer" are titles I believe we are supposed to share.

I might write something comprehensive at some point, but I haven't felt the urge yet, frankly.
I see through my glass, darkly - as I play my saxophone in harmony with the other instruments in God's orchestra. (h/t Elder Joseph Wirthlin) 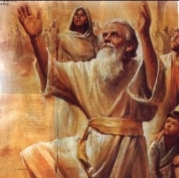 I will find that talk then. I was talking about your overall testimony, not just your thoughts on the Savior, though I look forward to reading those.
Top

I enjoy your thoughts, and have pondered these things in a very similar way.

I don't know if there is a literal price that needs to be paid, but also much like Ray I have mostly lost the need/desire to make any distinction between the symbol and literal savior. Some people need symbols to become literal to their interpretation -- for them I agree that the saving grace is literal. It is their belief that transforms into something very tangible. I have no business messing with that, and I want to talk to them in their terms and illuminate our common ground.
My avatar - both physical and spiritual.

I first found faith, and thought I had all truth. I then discovered doubt, and claimed a more accurate truth. Now I’ve greeted paradox and a deeper truth than I have ever known.
Top

Enoch, I just now read this thread and I enjoyed your thoughts. I LOVE the symbolism of Jesus, and I LOVE the example of Jesus. I am proud that our church is named after him, I just wish that we as a church would remember what he stood for. I fear we are losing site of that. The Gospel of Christ was not about power, dogma or fancy temples... it was simply about love.

As far as the need to pay for our sins... the way I see it life is an experience, not a test. You cannot fail and there is no punishment but sin will slow your growth, making it harder to ultimately discover the god that is in you. Sin will distance you from knowing your true self. So I guess the only payment we need to make is to have more experience, until we finally get it! (I really don't know what the hell I am talking about, but it sounds good!)
"The individual has always had to struggle to keep from being overwhelmed by the tribe. If you try it, you will be lonely often, and sometimes frightened. But no price is too high to pay for the privilege of owning yourself." ~Rudyard Kipling

I think my sins need to be paid for or else I would not put any emphasis on trying to overcome them. I guess I think the plan of salvation states the rules by which we live by, and so I live by those with the Savior, the literal Jesus Christ, as central in that plan.

I don't know that it "must" be this way...there could be other ways God could accomplish his work, but I can accept this can be His way, so I accept it.

Even commandments which are literal/physical (like baptism) have deep meaning in the symbolism behind them...so I think Jesus is both the symbol and the literal savior of my soul, even if I don't understand it all.
Luke: "Why didn't you tell me? You told me Vader betrayed and murdered my father."
Obi-Wan: "Your father... was seduced by the dark side of the Force. He ceased to be Anakin Skywalker and became Darth Vader. When that happened, the good man who was your father was destroyed. So what I told you was true... from a certain point of view."
Luke: "A certain point of view?"
Obi-Wan: "Luke, you're going to find that many of the truths we cling to...depend greatly on our point of view."
Top

Sin is an interesting idea. I think that misguided living causes suffering (that's my translation of your quoted sentence above). Sins (misguided living) need (causes) to be paid for (suffering).

I think Jesus shows us how a willing, powerful, and enlightened victim has the power to turn the suffering into joy and the sin into freedom, even for the perpetrator.
Tom (aka Justin Martyr/Justin Morning/Jacob Marley/Kupord Maizzed)
Higley and Guadalupe
Gilbert, Arizona
----
Sure, any religion would do. But I'm LDS.
"There are no academic issues. Everything is emotional to somebody." Ray Degraw at www.StayLDS.com
Top

Luke: "Why didn't you tell me? You told me Vader betrayed and murdered my father."
Obi-Wan: "Your father... was seduced by the dark side of the Force. He ceased to be Anakin Skywalker and became Darth Vader. When that happened, the good man who was your father was destroyed. So what I told you was true... from a certain point of view."
Luke: "A certain point of view?"
Obi-Wan: "Luke, you're going to find that many of the truths we cling to...depend greatly on our point of view."
Top

Ray Degraw wrote:I think our mistakes need to be "paid for" in some sense. I really do. I just don't know exactly what that sense is and if it involves a literal transfer of guilt and pain - or if the symbolism of the transfer is what matters.

I believe our sins are paid for by us. What we sow so shall we reap. I strongly believe in karma and may be one of the few LDS persons who believes in reincarnation. We only commit sin because of a lack of understanding. The way to get understanding is to sin. You get the benefit of doing the sin, then reaping the rewards. Later on, you get to see the sin from another perspective; often times when someone in your immediate circle goes through the same thing. You then get to use your understanding to assist them if you choose. It's a beautiful thing really. Painful at times, but beautiful.

Back to the original post, I was once where you are. I think what Jesus actually did was deliver information on how to overcome death, how to heal and to show us how our thoughts are powerful creations (as a man thinketh). When Jesus conquered death I believe it meant that he no longer had to incarnate in a body on this earth. He had overcome temptations, sin and was free from the bondage of attachment to earthly things.
Top

I can not decide if Jesus was savior or not. I see no need for someone else to pay for my mistakes. This theology only works if it requires you to be perfectly sinless to enter heaven. Why can not God just let you in if you are basically a good person? So if Jesus was savior it is something beyond my comprehension to understand the need, but I am open to the reality of it.
Faith, as well intentioned as it may be, must be built on facts, not fiction--faith in fiction is a damnable false hope. Thomas A. Edison

“The good thing about science is that it's true whether or not you believe in it.” Neil deGrasse Tyson
Top

I kind of like the line of thought that God would let you in, but you feeling unworthy would not allow yourself to enter. I really don't like the idea that allowing a sinful creature into his realm would somehow reduce his glory, I would argue for the opposite.

So for those who cannot get over their own sinfulness without some external redeeming force -- I understand how the atonement is powerful and life changing. For those who feel an innate forgiveness coming from god I think the effect can be similar in many important ways.

The key to me from my experience is learning to forgive. I think when you learn how a weak and fallible human can approach unconditional forgiveness you have to wonder how much more a perfectly loving God can forgive.
My avatar - both physical and spiritual.

I first found faith, and thought I had all truth. I then discovered doubt, and claimed a more accurate truth. Now I’ve greeted paradox and a deeper truth than I have ever known.
Top
Post Reply
30 posts